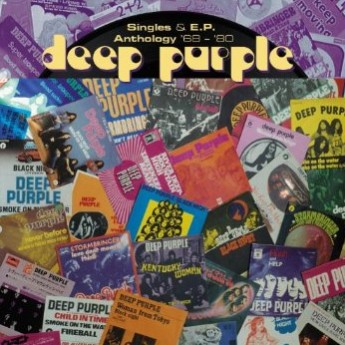 Singles and E.P. Anthology ‘68 – ‘80 is the most comprehensive collection yet of the band’s singles and E.P.s, including a variety of rarities such as non-album singles, B sides, alternate takes, live versions, plus a selection of a’s and b’s released in other countries, including the US, Japan and Germany.

Spanning all of the different Deep Purple line-ups, this collection begins with 1968’s “Hush”/”One More Rainy Day”, which was a huge US debut hit, and continues chronologically to the band’s final British single “You Keep On Moving” / “Love Child” (both off their last studio album, 1975’s Come Taste The Band), which was issued in the UK in March ‘76. Included in the collection are many versions of tracks that have never before appeared on CD, and are included on that format here for the first time.

Following the split there was still enormous interest in Deep Purple’s catalogue, which was kept alive through a number of reissues and archive releases from EMI. The first of these in the UK was a 7″ Maxi Single (April ‘77), which included the live version of “Child In Time” from Made In Japan. So successful was this that a second EP was issued later the same year, titled New Live & Rare. This had the previously unreleased studio out-take “Painted Horse”, from the Who Do We Think We Are sessions. This concept was reprised a year later on Volume 2, an EP which included an edited version of “Mistreated” from the Made In Europe live LP. The final EP in this series, Volume 3 (Oct 1980), included rarities: three previously unreleased tracks, including “The Bird Has Flown”, a rare session performance from the Mk 2 line-up for the BBC, plus “Grabsplatter”, an out-take from the In Rock album. It was the last 7″ release from the 1968 – ‘76 era in the UK and, except for a set of 12″ collectors EPs in 1985, the band’s EMI singles story was over.

Singles and E.P. Anthology 1968 – 1980 comes in a 2-CD pack with comprehensive sleevenotes by Deep Purple aficionado Simon Robinson, and rare single sleeves illustrated throughout the booklet.

15 years later they came back, with Wishbone Ash added to the line-up.

This is a fan blog created by Brian Currin.